Skip to Main Content
It looks like you're using Internet Explorer 11 or older. This website works best with modern browsers such as the latest versions of Chrome, Firefox, Safari, and Edge. If you continue with this browser, you may see unexpected results.

The ability to think critically is a vital skill for academic success.

Without realising it we use critical thinking skills every day. It means not believing or accepting what you hear or read is true but using your critical abilities to examine the evidence and consider what the speaker or writer is saying before accepting that something is true.

As a student, you need to be able to think critically about the resources and information you use in your assignments. You need to ask questions when reading the work of others; your writing needs to show that you can assess different arguments and viewpoints and use evidence to help you form your own arguments and ideas.

Critical thinking is about questioning and learning with an open mind.

Critical thinking will help you to:

► interpret data, arguments, evidence etc. and be capable of identify significance to your assignments

► develop your own well-reasoned arguments for your assignments

► use evidence to justify your arguments and ideas

► synthesise your thoughts and the thoughts of other writers

A 5 Step Process to Critical Thinking 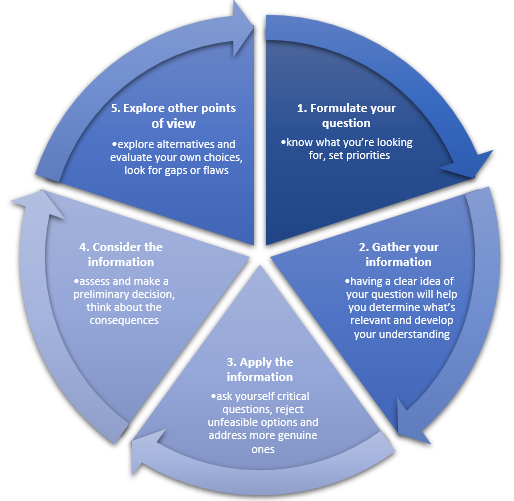 Try this simple exercise to help you to start thinking critically:

Think of something you heard lately. Ask yourself the following questions:

Someone you know? Someone in a position of authority?

What did they say?

Did they give facts or opinions?

Where did they say it?

Was it in public or in private?

When did they say it?

Was it during or after an important event? Is timing important?

Why did they say it?

Did they explain the reasoning behind what they said? Were they trying to make themselves or someone look good or bad?

How did they say it?

Were they happy, angry or indifferent? Did they write it or say it? Was it easy to understand what was said?

The miniature guide to critical thinking

This work is licensed under a Creative Commons Attribution-NonCommercial-ShareAlike 4.0 International License